Showing posts from March, 2010
Show all

A fear of microphones, flower girls, and tiny pieces of fruitcake wrapped up in tin foil 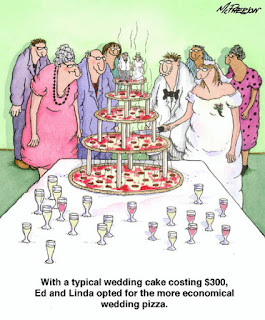 by Andrea Mulder-Slater I met Geoff at art school – me in my first year, he in his last. Although it was most certainly not love at first sight (he was otherwise engaged, I was blissfully unaware), we did hit it off and became part of a group of friends who regularly shared time together. When he left school to discover other, more distant pastures, it laid the groundwork for a pattern, which would last for a period of several years. Every six months I would hear from Geoff, whose points of contact seemed to vary with the seasons. “Hi, I’m calling from a payphone in Smooth Rock Falls…” soon changed to, “Hey, I’m calling from my house in London...” to, “Hello, I’m calling from my cell phone… in your driveway.” Eventually, one thing led to another and at some point, I agreed to ride shotgun in his 1987 Volkswagen Scirocco. When the two of us eventually decided to be married, we had no delusions of grandeur. Let’s face it; two artists heading into the world together do not a giant
Read more >>>
More posts