Ready to Win (Not Necessarily Safe for Work) 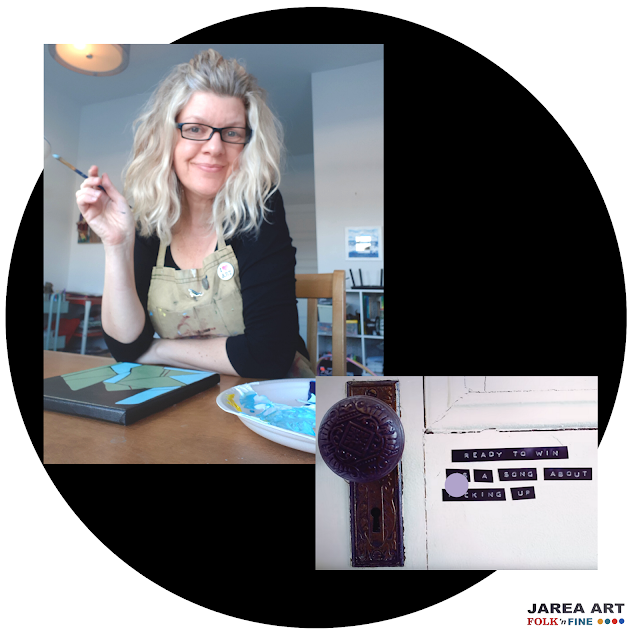 Yesterday, I was putting the finishing touches on the fourth of a series of paintings I’ve been working on over the past several weeks.

I have been really pumped about these new works, and was looking forward to sharing the off-beat story behind how they came to be.

What I'm trying to say is, I was feeling pretty jazzed. So much so, I even took a selfie.

Once they were signed - and since I wanted them to have a nice, glossy finish - I applied a thick coat of acrylic varnish to the three completed paintings.

I didn’t test the varnish first. I just went for it, covering every square inch. They looked beautiful, bright, shiny and deep - exactly what I was going for.

Then, I left them to dry.

When I went to check on the paintings a couple of hours later, I knew immediately that I had f**ked up.

The varnish had not only dried incredibly streaky, it also somehow managed to pick up some of the deep, rich colours I had worked so painstakingly hard to achieve, leaving bits of raw canvas where raw canvas should not be.

Was the varnish was too old? Did I rush the coats? Should have used a softer brush? Would it have made sense to do a test patch first?

I made a last ditch effort to salvage what I could by adding even more varnish, because expecting a different result by doing the same thing over (and over) again is what made sense to me at the time.

Then, I went to bed.

This morning, I threw three paintings in the trash and decided to abandon the fourth - forgetting about the idea altogether. Move on. Make a mountain out of a molehill. Dwell on three weeks of time and effort, lost. I gave up.

Then, my mom said something that made me stop in my tracks.

“Is that the advice you would give your daughter?”

I’ve always told my kiddo to get up and try again, no matter how many times she falls. I’ve also maintained that the only way to learn is to make mistakes and quite often, the best results come shortly after the bad events.

In the meantime, if you don’t mind a LOT of swearing, you will absolutely LOVE the song Ready to Win by Tokyo Police Club, but wear headphones because it is absolutely not safe for work, or home, or anywhere really. It's all about how F-ing Up makes us stronger and I can’t get enough of it, which is why it’s playing on repeat today, and everyday.